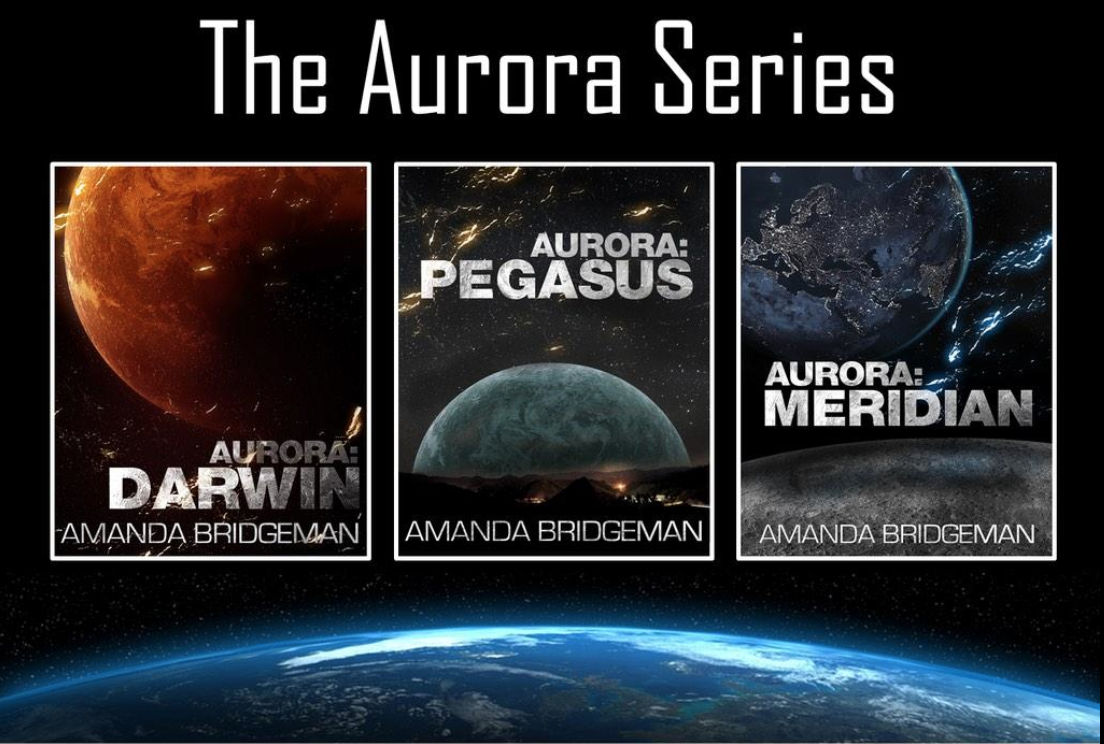 Momentum wingman Amanda Bridgeman (the Aurora Series) and I just finished enjoying each other’s books. We decided to have a chat about our books and writing. We could have done it in private, but where’s the fun in that?

Steve P Vincent: Hi Amanda. We’re Twitter buddies, but this is the first chance I’ve had to talk to you in more than 140 characters. Tell me three things I don’t know about you.

So what about you? Tell me three things I don’t know about you?

Steve: Ha! I don’t think I have a list that varied. Or that interesting. We should do karaoke some time. Here goes:

Okay. I’ve read book one in the Aurora series and I’m looking forward to the others. But for those not familiar with the series, give me your ‘elevator pitch’ – what’s it about and why might readers enjoy it?

Amanda: The Aurora series is about two very different people with one common goal, survival. It’s about a captain and a corporal who’ve been thrown together on a mission they discover is not as straight forward as it seems. Each book adds a new twist to what they know, as it builds up to a massive revelation. It’s for sci-fi fans who like character-driven stories with a nice blend of action, thrills, drama and even a bit of romance.

So what about you? Tell me your elevator pitch for The Foundation?

Steve: Globe-trotting journalist Jack Emery has to fight a cancer in the heart of Washington – The Foundation for a New America. The Foundation is a think tank with a dark side and darker plans. They’re fighting for American rebirth. To achieve it, they arrange for Shanghai to be blown up, spark a war between the US and China, try to take over the largest media company on the planet and are involved in a whole lot of other nasty. Their boss is Michelle Dominique. Jack has to stop her.

One thing that struck me was the detail you put into writing medical scenes, particularly when Doc (the Aurora’s medic) is stitching up people who’ve been shot, crushed, assaulted or blown up. I find this sort of thing really tricky to write convincingly, so tell me how you do it? Any secrets?

Amanda: For the most part I literally just used my imagination, but there were a few things I double checked with a friend of mine who is a nurse. Anything she couldn’t answer, she then asked the doctors at the hospital she works. So the medical side of things, I hope, is pretty realistic.

Now, tell me about your knowledge of international politics (particularly US politics) and journalism? Did you glean all your knowledge from the degree you did at university? Or is this an ongoing interest of yours?

Steve: A degree, a career in government, an obsessive interest in politics and current affairs and a wife who teaches this stuff too. It’s sick. Really. As for the journalism, less knowledge of that, even though the old man was a journo. I nearly studied it once I finished high school, but decided there was no money to be made in a dying industry. Then I decided to write books. Ha.

What’s one writing tip that will totally change my life?

Amanda: Listen to everyone’s advice, but don’t take it to heart. What works for one person, may not work for the next. Sometimes people think it’s wrong to do things a certain way, but if it works for you, well, then screw everyone else basically! When I first started I listened to all the ‘experts’ advice, and some of it was good, but some of it just didn’t apply/work for me. I soon realised that I had to forge my own path, taking bits and pieces of advice with me, and ditching the rest.

Steve: Sketch out a loose plot outline then write like a crazy man. My biggest problem prior to writing The Foundation was trying to perfect a scene before moving on. It made for a few nice scenes, but not much of a story. Having finished a book, I realise the amount of fine-tuning that takes place. It’s far better to get the whole thing down and work from a full draft than trying to perfect as you go. It’s only when it’s all down that you see the giant gaping wounds in your plot that need fixing.

To close this out, what are you working on?

Amanda: I have more of the Aurora series lined up and ready to go, but I’ve also been working on a brand new, stand alone, sci-fi novel, which I hope to start pitching to agents by the end of the year (or thereabouts). In some ways it’s very different from the Aurora series – it’s short and sharp, and set in the present-day on Earth. Told from multiple perspectives, it follows the immediate events of a world-wide phenomenon. The book is called The Time of The Stripes, and as per my writing tendencies, readers can expect the same level of tension, drama, and exploration of the human condition that I like to deliver.

What about you? What are you working on?

Steve: Momentum has begged and pleaded with me for two more Jack Emery books, so who am I to disappoint? State of Emergency is in the works, and going well. It’s a much darker book than The Foundation, dealing with the overreach of government in the United States and what might happen if that is taken to its fullest extent. There’s also a Jack prequel novella and a third full novel in the works. Beyond that, I’m casting my mind beyond the series and figured out a working title for my next project. In all I’ve got too much to do and no time to do it, just how I like it.

And that’s probably all we have the space for, given we’re now above the average length of one of my scenes. Just want to say it was great to chat with you, Amanda. I enjoyed the first Aurora book together, am looking forward to the next few, and congratulations of your announcement on Friday about being signed for three more!

Amanda: Thanks Steve! It’s been great chatting with you too. And congrats also on your debut rocketing up the charts – I look forward to reading about what Jack Emery gets up to next!

Steve P Vincent’s first book, The Foundation, was published by Momentum in September 2014. Connect with him on:

Amanda Bridgeman’s Aurora series (Aurora: Darwin, Aurora: Pegasus, Aurora: Meridian, and soon to be released Aurora: Centralis) are published by Momentum. Keep in touch with her via: