At the time of writing, that has been my life for four hours a night for the last week. It’s spilling over into other bits of life, too. I really want to hit ‘Reject Change’ on suggestions I empty the dishwasher, and ‘Delete Comment’ on most things I hear on public transport.

So brings us to Path to Publication III: The edits (click here and here for the earlier instalments). In short, I’m tracing the journey of publication for my book, The Foundation, from the pitch right through to release.

In this instalment, I’ll be dealing with the finer details of the editing process. 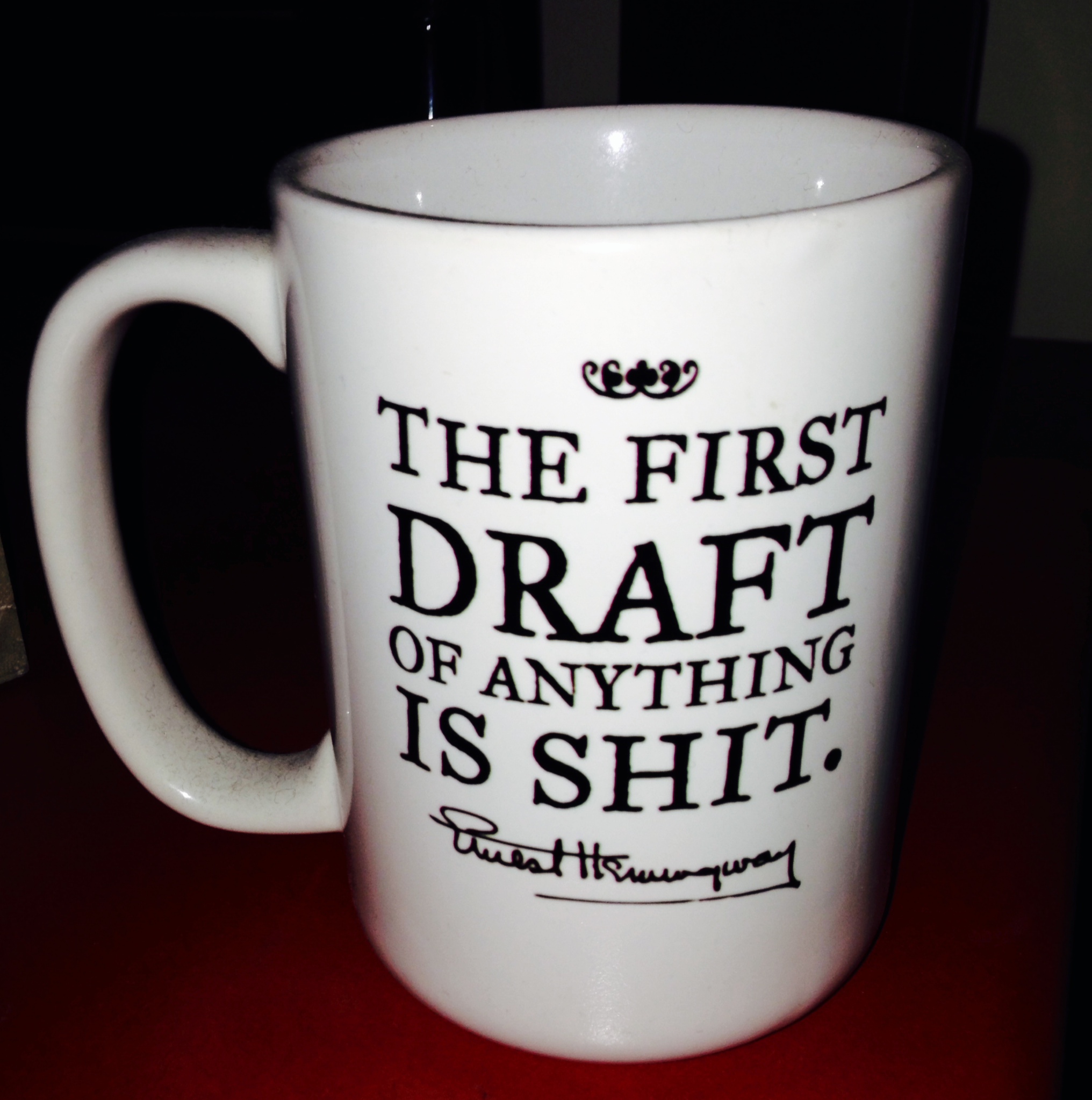 So I left you last time having fixed the major issues in the book, preparing to confront the blunderbuss of red shot my way in the form of copy edits.

My wonderful editor, Kylie, was responsible for 148 comments and 4350 tracked changes to the manuscript. Overwhelmingly sensible ones, too. I asked her how she approaches her craft:

‘I have one golden rule when editing: it’s not my book. I know how hard writers work to get their story onto the page – sweating blood or bullets, typing until their fingers ache – and the last thing they want or need is some stranger coming in to stomp all over their manuscript. It isn’t my job to turn the book into something it’s not.

So when I first read a manuscript, I’m looking for the heart of the story, trying to figure out what it is the author is trying to do, and taking note of whether the narrative voice, structure, even the characters, reflect that. It’s important that any suggestions I make improve the manuscript, rather than introduce new problems.

My editorial suggestions – whether in a structural edit or a copy edit – are how I offer whatever help I can to make the book the best it can be. And writers always get the final say on whether those suggestions are useful to them or not.’

So with that in mind, I worked my way through these changes, confronting the issues in the manuscript. This is in addition to the stylistic clean up that Kylie gave the manuscript: American spelling, proper capitalisation, naming conventions, layout… I didn’t even see those. 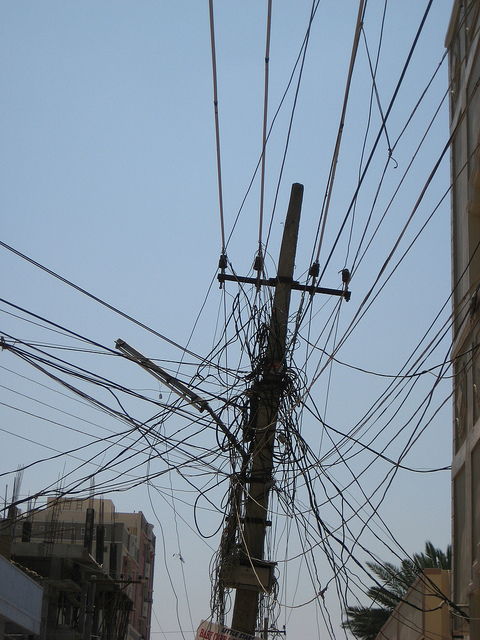 Some writers would be appalled by what I’m doing, because it exposes that – shock! – scenes aren’t as perfect as Michelangelo’s David from the moment they’re slung onto a page. Nor when they’re submitted. Writers don’t write flawlessly and sometimes don’t see everything that needs fixing.

But here it is! I’ve picked a busy page in the manuscript that doesn’t reveal too much about the storyline. The first image shows how Kylie has marked it up, complete with edits and comments. Other pages also contain style tips for the layout dudes, but they’re not shown here. 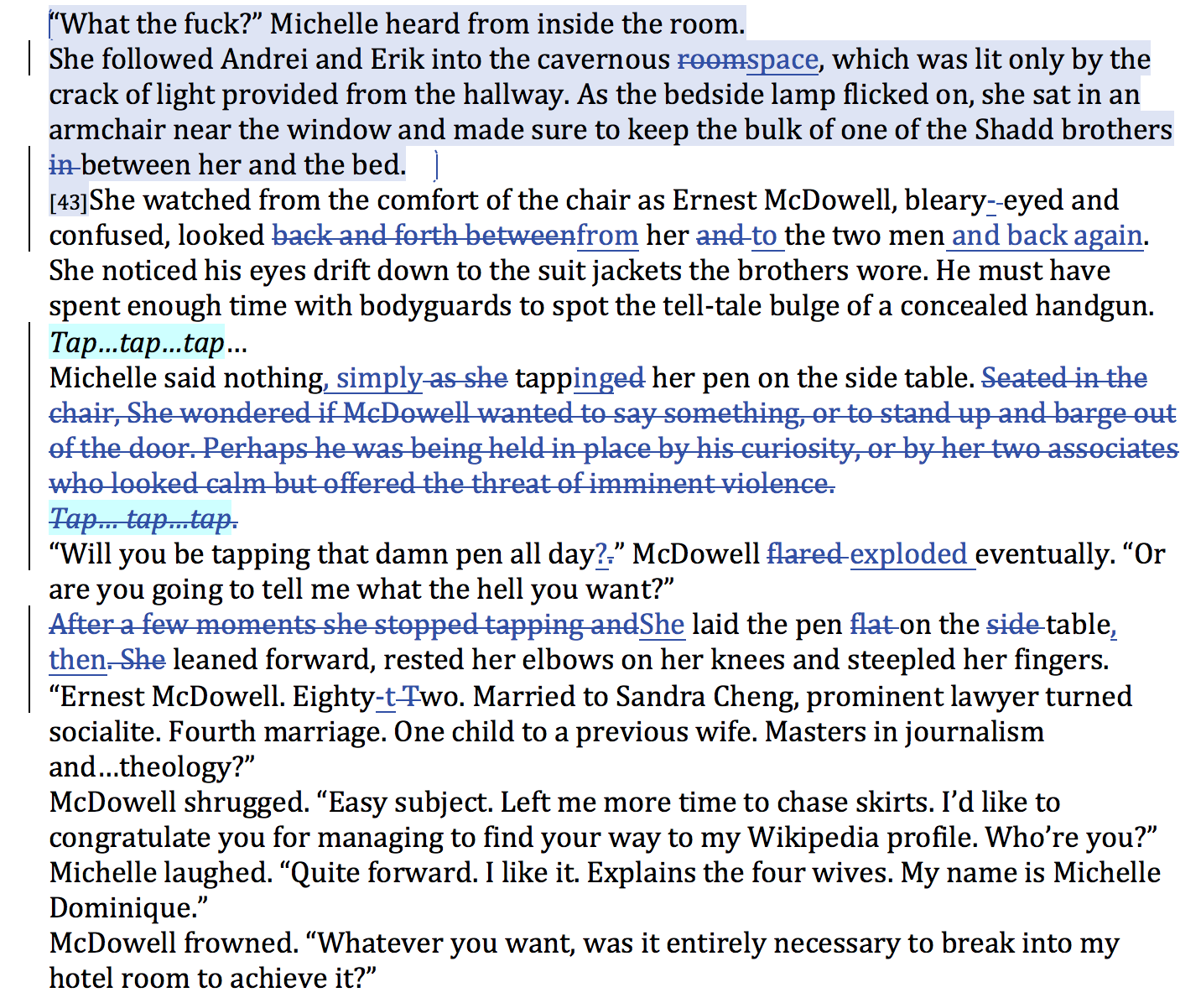 I reckon I accepted 99% of Kylie’s copyedits without issue. In those instances where I didn’t agree, or didn’t agree entirely, all I had to do was track over the tracked changes. The second image shows the same handful of paragraphs, after I’ve accepted Kylie’s changes but made a few of my own: 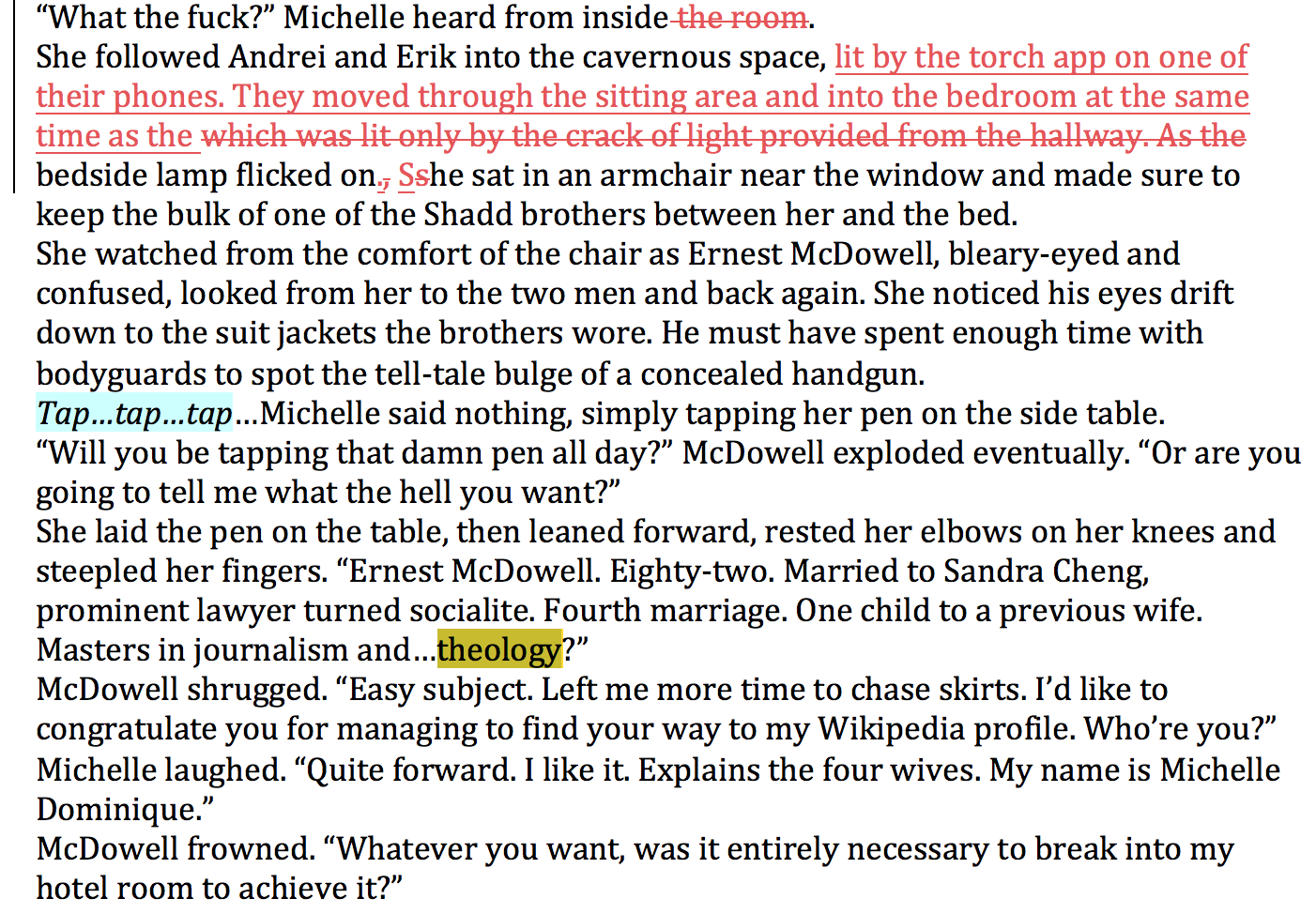 It took me three weeks and a hell of a lot of hours to get through the vast bulk of the changes. Not only did I respond to Kylie’s suggestions and accept most of her amendments, but with fresh eyes I also found stuff I wanted to fix to get the manuscript to a point where I considered it finished

Lesson 6: Writing isn’t always fun, neither is editing. Most of the time it is, but sometimes you need to get neck deep and just slog it out. Punching out first drafts, stitching it together, countless rounds of edits – this stuff is hard work. But it isn’t something to complain about. You’re not stitching together $6 shirts at Bangladesh sweatshop or clearing the sewers in Mexico City. This is a privilege. 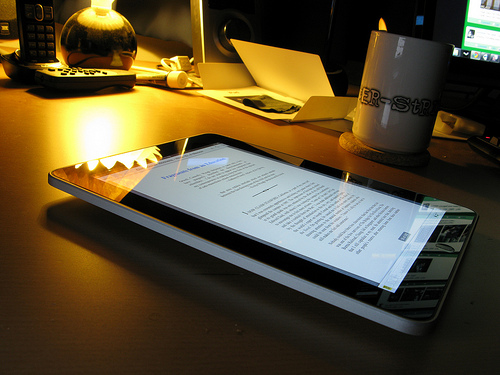 It’s an amazing experience reading through your manuscript before it departs for the final time. Sure, I’ll get a chance to read it again after it’s a fully proof read and knocked up book before stamped ‘FINISHED’, but this is the last opportunity for substantive change.

The good thing: It’s done! I love the book and I’m exhilarated that it’s going to be with readers in a few months and we’ll be selling millions of copies and drinking cocktails and eating canapés. Right? Or, if not, it’s still a pretty big achievement.

The bad thing: It’s done? Even though I love it, I still see bits that I’d like to tighten or that aren’t quite right that the reader probably won’t even notice. But I’m exhausted with it. Sooner or later editing becomes trawling the manuscript and just tinkering for the sake of it. That’s when you know.

Lesson 7: Know when to let go. My manuscript on the day I shipped it off was 88,000 words. I could keep playing with it until the day I die, but the law of diminishing returns kicks in. Plus, there are sales to make, mansions to build and other books to write. It’s not perfect, but it’s damned good and the best I can make it (with the help of people like Kylie, Tara and Joel). 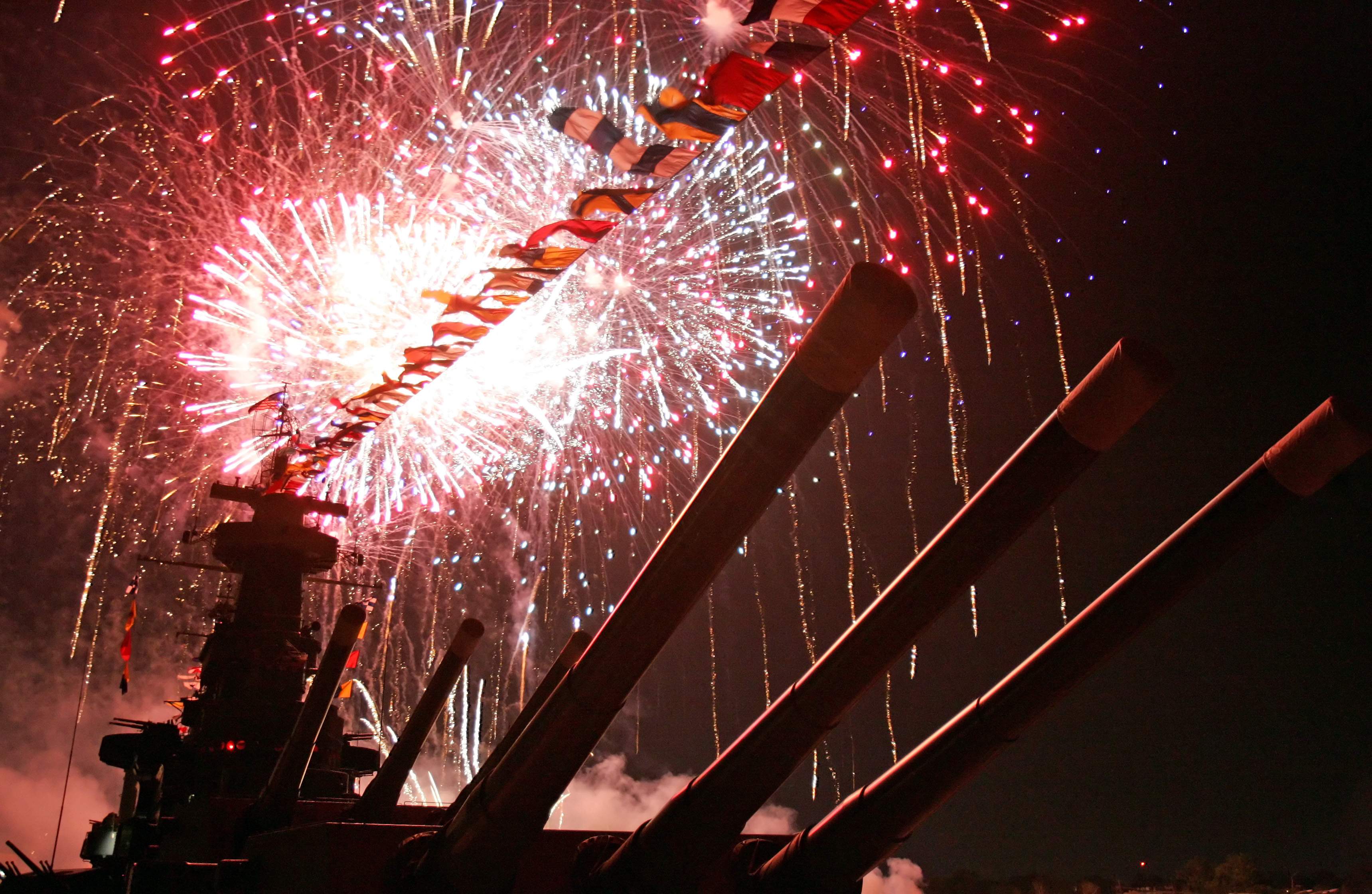 So I sent it back to Tara with the heady delight of getting my spare time back and being able to write again. With genuine curiosity, I asked her what comes next:

‘At this stage of the process, the copyeditor or in-house editor will go over the author’s comments, queries, and edits to make sure everything is smooth sailing (i.e., that no new issues have been introduced to the manuscript). After that, the book will be sent off to the typesetter and then to the proofreader (and the author will have one more chance to comb through it as well).’

So the book is done, assuming I haven’t broken my book with my tinkering, at any rate. I’m happy with it, and like a proud parent I’m excited (and a little relieved) as the little bugger nicks off to find its way in the world.

Tune in next time for how a cover is designed and how a book is marketed.